Time lapse video of WM and JBR members at the camp of WM Sar. This video was done while we were camping at WM Sar in the winter month of December 2015.

The time lapse video starts from our arrival at WM Sar  and ends at our departure the next day. 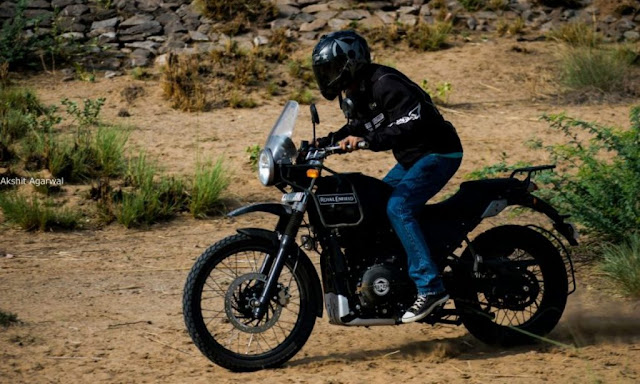 Himalayan might not be the fastest on the road, not the most powerful, not the nimblest on the sand, not the most technically advanced, not the prettiest of them all. But what it is, is ‘Average' in them all, and that is the real deal, a true hallmark of an Adventurer; man or machine. It doesn't matter if you are an ace at what you do, what matters is that you never give up, however, difficult the situation might be. That is what the Himalayan is capable of, to get you through the difficult situations, not by Power, not by Nimbleness, not by Technology, just by being ‘Average'.

Last week JBR took Himalayan for a test ride through the ‘Wild Cat', one of our favourite off-road tracks, which has plenty of action on offer. It was a hot day, temperatures closing 47 degrees C, not a good day to ride through the loose sand.

Looks: Well it is not the prettiest bike to look at and from some angles it even looks ugly, but it definitely is a head turner. When it passes by you are curious to follow it through. It is imposing when you see it parked; straightaway your attention is drawn to the functionality and the purpose. Function over Form seems to be the mantra for the Himalayan, and personally I prefer it that way. The closest that come to it in terms if looks is probably a purpose-built a military vehicle. It is the same no-nonsense attitude that Himalayan carries.

Ride: On the road it is calm and serene. The windscreen deflects all the wind away from you making you ride stress and noise free. There is no wind drag, no vibrations, and no unnecessary clattering sounds. I previously have owned an RE Classic 500, and even after a dozen of modifications (which essentially were on the Himalayan lines) the ride quality was nowhere close to that of the Himalayan. The front 21-inch wheel, a sturdy suspension means that the potholes and speed breakers don't reach you and you sit comfortably while it does the hard work for you.

Handling: It is one of the strong points of Himalayan. Low saddle height, high handlebars, and the rake angle ensures that you are in control all the time. The moment you sit on it, you feel at home. Even the short riders would be comfortable throwing the bike around.
On the road, it felt in control all the time and handled the corners pretty well, but its real character shines once you take it off the tarmac. The ‘hard pack' terrain, the rocky kind of which you mostly find in the mountains is absolutely no problem for Himalayan. It always feels in control even to an extent that it tempts you to go fast. But the real surprise was in the loose sand where it performed beyond expectations. The conditions we tested were probably the worst to be on the sand, peak summers meant there was no moisture to bind the sand and it was too loose. On loose sand, you need a bike which is light enough to sail over the sand. At around 182 kgs, Himalayan is not light, but it manages to get you through without letting you sweat you much.

Power: Agreed, it is not one of the powerful bikes around. It is not the kind which will try to throw you off the saddle the moment you let go the throttle. RE Classic 500 and the Duke 390 are much more fun than Himalayan, but it gets the job done, that's what matters. It was able to cruise at 110kmph with ease on the highway and I felt more comfortable on it than modified Classic 500 or Duke 390. On the sand where even walking was a task it managed to get it out itself whenever got stuck. It was nearly impossible to get Classic 500 out when stuck; it just digs its own grave.

Conclusion of Himalayan Test Ride: In all, it is a great value for money package. Himalayan is one of the best bikes, which you can buy for adventure travel currently in India. It is the most refined Royal Enfield but still lagging as per the normal and accepted industry standards. Deep down it is still an Enfield more than an Adventure Tourer. But rather than buying a ‘True Adventurer' which comes for at least 12 Lac rupees in India currently, I would buy a Himalayan and invest the rest of the money in travelling across the country.

WM organised one day OTR in the summer heat. JBR members also participated in this event.

WM and JBR members on Aravali route. Aravali is the greener part of

Rajasthan. Some of our best rides happen during the monsoon season.

Riding In The Wild


A short video on Western Motorsports members riding in the wild on their trusted bikes.