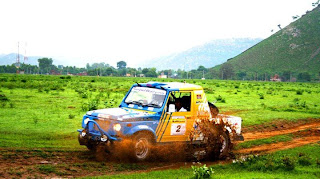 J.K. TYRES THE MONSOON RIDE.... The word will keep echoing in my mind for so many time. Sweat,toil,Passion,Exuberance,fun,nuisance,colors,shocks and MONSOONS. This episode of Monsoon Ride had all hues that a typical Bollywood BLOCKBUSTER has. And Indeed it was nothing short of one.
It had drama. It had pain. It had shocks. It had colors. and We dont know though but It might had some romance as well.
I am associated with WESTERN MOTORSPORTS since its inception, some time in real and some time in soul. The Monsoon ride was the event when I was here with body and soul both. Though My contribution was limited to final event only, but I suppose I would be excused for taking credit of whatever I did.
WM created The Monsoon Ride considering all those enthusiasts who wish to enter Motorsports but have limitations of TIME,Experience and Money. Most of the events offered by MOTORSPORTS CLUB today are either of extreme category, involve 3-4 days or charge hefty fees from Participants. Western Motorsports begged to differ. And We proved it by THE MONSOON RIDE, which was for all. We are serving as training ground for MOTORSPORTS in India and We are proud of that.
J.K. TYRE Monsoon Ride had around 80 Entries out of which 50% were first timers.
The Monsoon which served participants with beautiful picturesque route also created havoc by washing off the route twice.
But hard work and team effort by TEAM WESTERN MOTORSPORTS didnt let the havoc reach participants.
Rally culminated in a smashing way with all participants having a gala time.
Prize distribution ceremony was organized in Angara Disco. 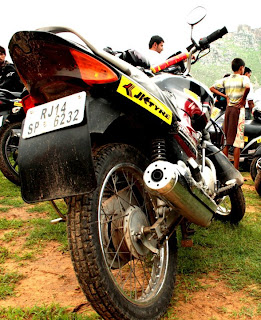 Rally culminated with flying colors and satisfaction on the faces of TEAM WESTERN MOTORSPORTS.
More than a Motor sport event It was a saga of human endeavor and Passion. It provided a platform for people to meet. Thousands of relationship were made and people departed with heavy hearts with a promise to meet again.
THANKs Western Motorsports for giving us opportunity to meet so many wonderful people at one platform..

JK-Tyre The Monsoon Ride 2010 : The story behind the scenes

TMR 2010 – this were the only words that kept echoing in the mind of Anukraman and and the fellow team mates since the PD of TMR 2009.

TMR 2009 was a learning experience for WM . Thanks to the honest feedbacks of participants, sponsors, well-wisher, marshals, officials and of course our seniors from the motorsport fraternity. A lot of though was given on each and every aspect of the shortcomings of TMR 2009. The fact that the event management planning, with the even manager, started long before the first Recce for TMR 2010, speaks for the commitment of team WM for making TMR 2010 a grand success.

The first concern of Anukraman before starting the recce was that the route should be suitable for small and mid size cars. Hence most of the recces were conducted in a car through out the year. But then it was also a priority for him to ensure that the tracks chosen were not only demanding for both the Driver and the Navigator but also beautiful in a unique way so that we could give our participants an experience that would bring them as close as possible to the unseen beauty of Aravali during monsoons and make their rides memorable.

The first recce began in my ford Ikon on 29th Sep 2009 . It was a 400+ k recce in which we discovered very interesting off-road sections but unfortunately each and every one ended on a dead end.

Months later a final recce (what we believed it was) was done on 11th July 2010.Shalini had seen the track for the first time. She found the off-roads sections amazing. Safe enough for cars (subject to little precautions and technique), but also challenging enough to qualify for an extreme category rally. Also this time there were not one but two Infamous and Innovative “LOOPS” that freaked participants out during TMR 2009. We were all set to rock.

Little did we know that monsoon, which was the essence of the rally, the season that reveals a breathtaking beauty of Rajasthan, would show its darker side to the organizers of WM.

I met Anukraman at his home on the eve of 27th July. Just 04 days for the D-day. Anukraman and Yatin were in a mess. The rains had washed off the best section of the route. Fortunately one of the photographers for TMR2010 who had arrived from was already in Jaipur. His experience as an organizer came handy and the final route was prepared just a day before the event.

It was a sleepless night. None of us knew when one day ended and the other began. Before any one of us could get even a shortest of the nap, it was time for reaching the Park Farme and to start the placements for Leg-1.

Participants started entering the Parc Ferme and the line up had started. It was 4 o’clock in the morning yet the organizers could fell the heat. It was probably the pressure and the apprehension for the worst – Heavy Rains. 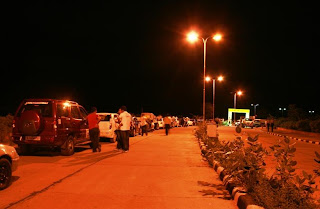 Sudev Sir had arrived and Anukraman had altleast one load off his head – Placement of officials. The convoy had left. We were all set for the Flaf-Off. Tony Dada & Yatin took charge of the start point. The first vehicle left at dot 0500 Hrs The Rally Was ON.

By now Anukraman was exhausted. The event had been through many unprecedented happenings by now. The physical exertion and mental pressure on him was huge. So we decided to hit the track in my car so that Anukraman could relax a bit and focus on the event activities.

Never had I seen such a beautiful morning in Rajasthan before. We were awed by the beauty of lush green Aravali ranges covered with monsoon clouds just as we entered Ramgarh. Pradeep ji was pleading us to stop the vehicle at the scenic locations so that he could get some good posts for FB. To his disappointment, pressure of the event did not permit even a single stop L . 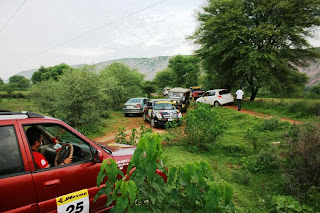 As we were approaching Prapagrah, our worst fears came true. Incessant phone calls started coming to Anukraman that vehicle are getting stuck in the off-road section which was included for bypassing Pratapgarh village.

6000 hrs - There was a lot of tension at TC- . TC officials were advised to stop all the further vehicles and Anukraman went ahead for bringing back the stuck vehicles. By 0630 hrs the TC was crowded with vehicles. 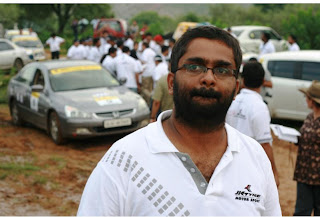 A new line was set on the foot hills of Pratapgarh fort. Few new instructions were given to each participant to reach a new TC from where the further instructions were available in the road book. We only wished that the rally if finished without any further hindrance.

Yatin shut himself in a hardly lit room at and started the most tedious job – results. I tried to help him but I failed miserably. Raj Sir and Philip Sir meticulously checked the results and the provisional result was displayed in anagara by 2000Hrs odd Round -2 of trouble had begun. 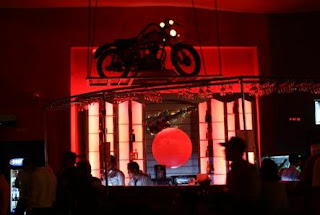 While the Guests waited eagerly for the final results amidst the lovely ambience, music and wine at , Anukraman and all the TC officials faced the fury and objections of discontented participants for the provisional results. No.2 put and objection and after a long discussion, debate and counseling the matter was closed. The experience & wisdom of Raj sir had really come handy at this critical juncture. 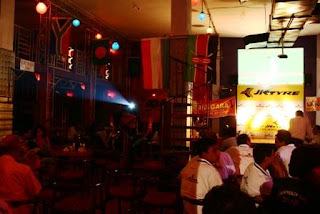 The event finished smoothly thereafter and the last goodbye were said after the dinner.

The event that was planned all the year long, the event that we expected to awe the participants had finally finished but with some twists, turns and disappointments. But as Raj Sir wisely said to one of the participant – “some times we plan to the best of our capacity and execute our plans meticulously, but still we fail for there is an unknown factor that can still change the outcome and that factor is – LUCK”

May be , we at WM fell a little short of luck this time.

Its 2 00 Am in the morning..
Media center of J.K TYRES THE MONSOON RIDE 2010 is buzzing with cacophony. Sleepy... No we are not.
In few hours we will be on the road..
Time checks are being planned.
We are not anxious.. But we are boisterous for sure.
We are confidante.
The Rally will kick off in an amazing way for sure.
Be with us. Dont miss the action. If you are not here. Be with us on facebook.
I bet you will feel the rush in your vessels.
Posted by Western Motorsports