…stepping up for an adventure

Finally, the day for which I was waiting for past few months arrived. I remember when our seniors told us about their experience at Western Motorsports, how they worked day & night, their learning and all. The same day I thought that such kind of experience will be a good way to test my abilities, to go for an adventure and to enjoy the Real Motor Rally, I had just seen such kind of rallying on some sports channel but seeing the real event with my eyes will be just amazing.

I remember the day when Anukraman Sir came to our college with his team members and gave a briefed all of us followed by a small aptitude test. Those questions were so easy that sometime it made us feel that is this really they want to ask us or we are misinterpreting the questions, but when in last they discussed those questions answers with us it made us chuckle on our own mistakes. But got a lesson with the same that never take life too seriously, sometime solution can be found much more easily no need to make things complicated in your life.

Day after that we were called for a small get-together with the team Western Motorsports and 6 of us went together at the meeting spot from where we all were taken to the place which was a surprise for us. Wooooow!!!!! It was the damn track, full of muddy soil, we were not able to drive our bikes properly in that soil, but it was giving a feel like “YES” this is the place where we want to come again and again and can ride our bikes however we like. The muddy soil was giving a feel of a dirt racer to us. Anukraman Sir also briefed us about, how the whole process works, he told us about the importance of selection of routes for the racing track and how traffic moves. It was a great experience. Waiting enthusiastically for the great event to start and to be part of that event….
VIKRAMADITYA SINGH RATHORE
Posted by Western Motorsports No comments:

In its 3rd year JK Tyre The Monsoon Ride ‘2011 is an event organized by Jaipur based Western Motorsports, a group of young Motorsport enthusiasts. Who aim at not only encouraging other enthusiasts to promote motorsports through their participation but also promote the long forgotten historical places of Rajasthan and adventure tourism. JK Tyre The Monsoon Ride is a T(Time) S(Speed) D(Distance) rally event where participants are judged on their skills of managing these factors in the event and score the least of penalties while travelling on the prescribed route. The event attracts participation from all over the country and has become a major event in motor sport calendar of India.

1st JK Tyre The Monsoon Ride 09 was an event of 180kms, organised in two parts. The first leg started from the magnificent Jal Mahal crossing through the historic Amber fort to the Haunted fort of Bhangarh. The rally drew attention towards Pratapgarh, Ajabgarh and haunted fortified town of Bhangarh. The event continued to its second phase from Bhangarh back to the Pink City Restaurant which in itself is a historical place enroute Raisar and Ramgarh . The main attraction of the second leg was the Jalebi loops as it also tried the participant's Tulip (Road Book) reading skills. The event was divided into 4wheel and 2 wheel category. In total there were 52 entries of which 50 took part and 48 finished the rally. As this event saw a culmination of hard core Rallyists and novices, the event turned out to be a huge success which not only brought a lot of positive vibe and encouragement, but also promises of future participation for the coming years.

30th July 2010 dawned with a promise of more participation for the 2nd JK Tyre Monsoon Ride '10. It was a 3 day event which was flagged off from the magnificent Jal Mahal on the 01st of August and finish at the Angara discotheque, Jaipur where the results would be declared. The event was flagged off by his Late His Highness Maharaja Bhawani Singh ji of Jaipur. The encouragement of the previous year’s event had Western Motorsports make their event more adventurous and challenging. The participants this time had a stretch of 300kms of the beautiful Aravali to cover but they had to battle through the rocky roads, dig and force their machines through heavy monsoon made mud puddles and deep water sloshes. This time the event was a really challenging affair for all participating vehicles as it could be seen by the end of day the beating each had taken to overcome the challenge. This time the event had exposed it's participants to a rougher challenges that would be coming up with the RIDE in the years to follow. The event was a new experience for the previous year's participants as well as the new ones who were competing for the first time. So, it ended with a promise of the unexpected for the event to come up in 2011.
3rd JK Tyre The Monsoon Ride 2011 being held from 29th July to 31st July, is once again going go through the beautiful Aravali Range and showcase the nostalgic effect of Monsoon on the Desert state. 29th and 30th July will have pre event activities with press conference on 29th July and on 30th July will have competitor’s briefing and ceremonial flag off with Vehicle and Document Scrutiny on both the days. 31st July will be Rally Day starting with picturesque Jal Mahal in background. The Ride will hosted in a grand manner with grand beautiful venues, photographers from abroad covering it, event going live on international automobile portals, lot more trophies to be taken home and more. It will be a real test of navigation skill and patience. Driving in controlled speeds which are also going to put up a challenge for driver in the back roads of Rural Jaipur. In total the rally will cover around 250 kms. To promote motor sport and adventure tourism in Rajasthan a Trophy for locals has been introduced called JEYPORE CUP, for the first timers at the rally there is a ROOKIE CUP and to have more and more women participating and showcase the women power a new trophy for BEST COUPLE also has been introduced along with pre-existing ALL WOMEN category.

In the event awareness for water harvesting and plantation will also be raised by distributing relevant material to the participants, visitors and people on route.

Hope to see you at the Ride!!

for details visit www.themosoonride.com
Posted by Western Motorsports No comments:

The Monsoon Ride: What to expect this year? 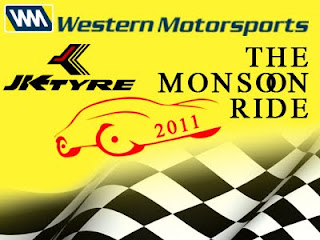 Ever since we conceptualized this signature event of ours, we had always one thing in mind that we have to offer something unique each time. A lot of hard work and toil has been put in to bring this event this far and we are still trying our best to give all the competitors an experience of a lifetime.
Whenever you create something, you are bound to make mistakes and that’s how you learn. The last two editions of the event can be categorized under the term “learning curve”. Some mistakes and some unfortunate happenings by gods grace made us learn that when you are running an event, “perfection” has to be the key.
This year, we are trying to put in all those lessons, which we have learnt over the years to give all the participants something worth remembering. This time JK-Tyre The Monsoon Ride 2011 is going to be trickier, shorter and far more technical. With some new categories for novices and for those who live at the home place of Western Motorsports, Jaipur, and also for couples to boost up the number of female participants.
While you are on the track, if you get lost or miss a TC, don’t be surprised because you are bound to make mistakes. Tulip reading would be something that you need to practice again and again before coming to the event. Always remember that mathematics is your best friend if you are planning to give a shot at TSD (Time, Speed, Distance) rallying.
The registration forms for the event would be available on the official website from 15th May 2011 and also keep checking our official Facebook page through which we are trying to paint Facebook, yellow :P
Posted by Western Motorsports No comments: