The Monsoon Ride – 2009 by Western Motorsports


By :- Gaurav Narula & Co-driver Hari Subramaniam Competition No. 34 in


– an organization into rallying led by Mr. Anukraman Singh, the president and with his team did a wonderful job. I would not say that it was the perfect event but I would not crib about any thing.

For me as a participant – I got interested into Motorsport some 3 years back, but due to reasons beyond control could not take it up. I got interested because some time back I got an offer from Maruti Suzuki to be a part of this small TSD format rally in . Honestly I did not understand the gimmicks of the format but was looking out for more such rallies.

Western Motorsports came into contact through one of the networking sites and I was game for it. Till 3days before I did not have a Co driver, but I was so keen to do it that I sent the participation form without details of the Co driver. Then I got my co driver, a good friend Hari Subramaniam. He finally agreed and I was glad.

The Road trip to Jaipur – We started at 7 from and were driving cool as we knew we had to report till 11 AM. The route was amazing, the roads were good. We took a stop for breakfast. Finally we reach the place – The pink city Restaurant. I don’t know about others, but we had troubles locating the place. The directions were good but since the place was a little in the interiors, we kept looking out drove a little here and there and then with support from the local tourist guide we reached the place. Well I am sure there were other people also looking out for the place. Since everybody could have reached the road and it was so close to the highway, I am sure everyone would agree the choice of venue overall was good.

At the venue the process was very well organized. People at the registration desk were so well organized. I would really like to appreciate Shalini Singh, who actually worked like a Pro. The support from the other team members Kausiki and Pael needs to be appreciated as equally as Shalini. I should not forget to mention the efforts of Mr. Bharat Upadhyay.

So from the registration process that was pretty simple (apart from all the paper work formalities involved) we went on to Yatin. The guy who sure was keeping the sponsors happy. Giving away the sponsor stickers, mementos and kit bags and so on. 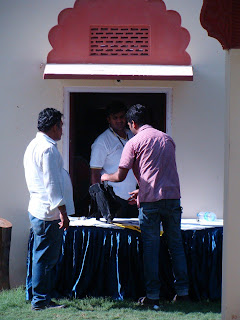 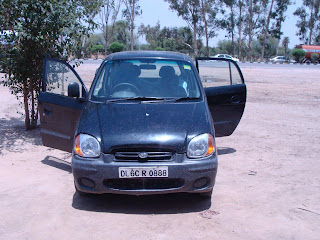 My Car before Stickering 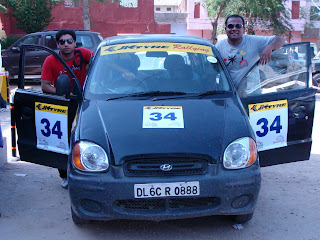 After Stickeing - Ready to roll with riders

The next step was the briefing. We had some time and went out to grab a bite. After that was the time for some solid gyan. We got some important tips from one of the experienced person. This guy Pradeep came in real handy just before the race. He gave us some very important and interesting lesson to do something in the race. I think without his support we would have not even been found anywhere in the race. Can’t thank him enough for all his help.

So we reported for the rally at 4.30 AM, while the race was to start at 6 AM. Again must say the things were well organized and everything was really smooth. Breakfast was served to everyone who was a part of the rally. With our car numbered 34 and a 2 minutes time gap between every flag off, we were flagged off finally at 7:18 AM. So after a long wait we were finally in the race. The speed – 30 KMPH, Special instruction – follow the traffic rules, don’t over speed, keep the villagers and live stock safe came in from the organizers. We made one more rule for ourselves – Enjoy the race to the core keeping it really professional.

Once on the track we had a good co ordination between the two of us – Me and Hari. We did really well in the first leg. The leg was suppose to end at Bhangarh fort. The idea was to maintain an average speed of 30 kmph between the TCs. We did not knew the TCs, which is a format of the TSD. So we travelled on a route given by the organizers. The route was amazing. We saw some really good mountains, a fort on the hill top, a few villages. It was also amazing to see how the kids waved us on the way. It was some thing not out of the ordinary life. In the first leg we reached without any trouble.

We reached in time with little mistakes. Bhangarh was an amazing place. So away from the rough rash and fast paced life of cities, in the interiors of Rajasthan it was some place.

The venue was nice if we were suppose to go there for a look at the fort. But unfortunately since this was the end of leg 1, and we were to stay there for some time, we could have been taken to a place where there was some electricity or shade atleast and some water to drink. Since Mr. Anukraman, president , did extend an apology, I am sure everyone can get over it. We can for sure coz we went on to explore the fort. The place was nice and well maintained. I am glad we went out for the excursion.

Despite all odds of not having water and electricity, we got some good food. Thanks to the organizers.

The leg two started and we were flagged off. The riders ahead of us sped off as soon as they were flagged. We spoke to the man at flag off and agreed that they did not do a right thing. But once we were on the track and close to them we realized how smart they were. The sped off to stop a little ahead so that they could grab some cold drinks and water. We realized they were sensible and we also stopped for some water and drinks, and post that we sped off to cover the time lost. Now the SPEED WAS 40 KMPH, same instructions, same rules.

We were unfortunate that we could not complete the race. We were going real good till we found the first TC and realized that we were somewhat off time. We were driving well after that, but due to some problems in understanding the signs we took the road not travelled at all. We drove into sand and got stuck there. To be honest since we were driving really good we did try really hard to get the car out of the sand, and what we got was a breakdown – Broken clutch plate and worn out pressure plate. I would really like to thank Mr. Raj for his support to help us reach the local village and arranging help. I would also like thank the locals who helped us reach jaipur by towing our vehicle for all the repairs. 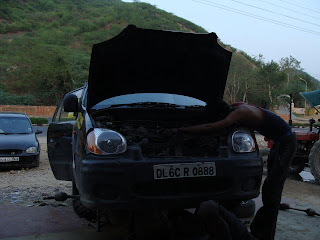 Repairs being done in the middle of second stage

The car was ready to roll again but the race was all over. We had lost it due to a no show. Though we could not complete the race, but the event was so much worth being there. There was so much of learning, networking, making friends in the process etc. We missed the entire prize distribution ceremony, but did go back to see the entertainment program, enjoyed the food so much, as we were tired and disappointed.

We were really disappointed because we did so well in the first leg, had a good start in the second leg, and we so sure that we would make it to the top 10 if not top 5. We were 6th in the first leg, and for a first timer it was some achievement.

Check the result sheet … CAR NO 34 – 6th in place. We were so amused to see our performance. 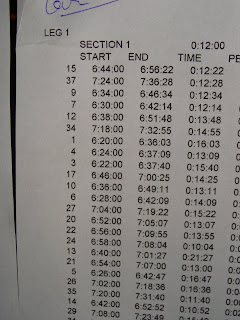 See our postition on the result sheet of Leg - 1


I cannot thank western motorsports to organize such an event. This event was a mix of everything – LEARNING, ENTERTAINMENT, NETWORKING, FRIENDSHIP, and surely some good EXPERIENCE.

We would never forget this event. This is going to go down as a part of life history.

Overall I would like to summarize in a couple of lines. is a team of enthusiasts. A well coordinated effort, an amazing route, well organized event, some healthy competition, a lot of support from the organizers and the participants.

Not only would I never miss an opportunity to be a part of the western motorsport event, I would love to be part of the other TSD formats.

Though I did not complete the race….. BUT THIS IS JUST THE BEGINNING……….LET HOPE I CAN MAKE IT TO PLACES AND WOULD TRY TO ACHIEVE A LOT FROM THIS…………THE ADRENALINE RUSH IS ON…..