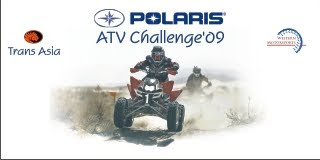 Hello Friends,
We are just over with yet another event, Polaris ATV Challenge 09, which was India’s frist ATV Rally. Doing back to back events is not easy but TEAM WESTERN MOTORSPORTS pulled it off beautifully. During “JK Tyre - The Monsoon Ride” itself I had suffered a leg injury, an internal one but that was not going to stop us as a word was given to conduct Polaris ATV Challenge 09. With all the hiccups taken in stride the event was a good success.

As nothing new we also did have differences with the presenter of the event Trans Asia, but if these are not there what is the fun what is the challenge. I do agree we lacked on our part on more than one front but that was due to getting pissed off due to the behavioral discrepancies from Trans Asia, I put my hand up and accept the fault atleast on our part as it was not at all professionalism, but humane.

The event was basically executed in a week’s preparation as we did not have to work on the entries only the execution which was taken as only the rally execution and not as the wholesome rally including the peripheral. It was a great learning experience and has improved us on our logistical arrangements, now the team has the confidence of pulling off an event anywhere with whatever magnitude, but we are not going to fly on the confidence, we would like to progress gradually.

It was a drastic change in climate and from no rains for a fortnight god had mercy at last and it rained almost all through the event, words of Mr. Rusy Kohli came true, weathermen watch out for your careers. The rains were too heavy for day 3, the Leg 2 SS 1 had to be cancelled as going through a particular section of this could have caused injuries as it had become water logged and too slushy.
The event was completed without any protest or mishap. The only mishap which occurred was a breakdown in an ATV of competitor Raj Singh just before the start of Leg 2 SS 1, till then he was leading the rally with a great 3 minutes lead. Rusy kohli and Ashish Bahl emerged winners of their respective categories and Rusy won the overall trophy also. At the time of Prize Distribution Ceremony it was drizzling all the time, the ceremony was conducted in the rain all loved it and enjoyed it.

The effort of all the officials and marshals was highly commendable as they withstood the rain, they rode on their bikes all the way from Jaipur to the stages in heavy rains to do the duties, I salute their passion to the sport. Will not like to point out any single official’s effort but effort of Shalini Singh has to appreciated, she got late in starting off from Delhi but did not take it as an excuse but drove all alone with her CHOTU (bolero) all the way from Delhi reached Jaipur at 2 in midnight and was on her toes by 4 and on stage to take up her duties. HAT’S OFF!! Shalini Hat’s off to you.

Polaris ATV Challenge too just like JK Tyre – The Monsson Ride was very well supported by people from different motor sport groups, that is the sporting spirit which I wish would wish to continue and prevail. Sidharth Singh of Jaipur Motor Cycle Club was the COC, Adhiraj Singh of Rajputana Jeep Club did the starts of day 1, Vikas Singh of Team Jeypore was there for the day 2 starts and Anil Gautam from SAAHAS with his entire team came and did the flag-off.

There was another lady in the event just for her sheer passion and commitment to the sport, DEEPA MALLIK a lady paralyzed waist below came all the way from Ahmednagar, just to take the flag off and ride a few kilometers into the stage. Seeing her courage and passion we deployed a jeep to back her up in the stage with her support system. Hat’s off to you too Deepa.
The Polaris ATV Challenge is over now and we are planning an event in winters. The event would be a tough one for participants as well officials but am pretty sure it will also be through as knife through melted butter. It would also be on TSD format and we are looking into putting in separate categories off-road and tarmac both for 4 wheelers 2 wheelers and there would be another element which I would not like to disclose as yet, but can assure you it would be a spine chilling experience. The event is still in planning stages but can assure you of a new experience and would be trying to eliminate all the flaws which were there in the earlier events
So hope to see you in winters, keeping fingers crossed.
Anukraman Singh,
COC,
WESTERN MOTORSPORTS.
Posted by Western Motorsports