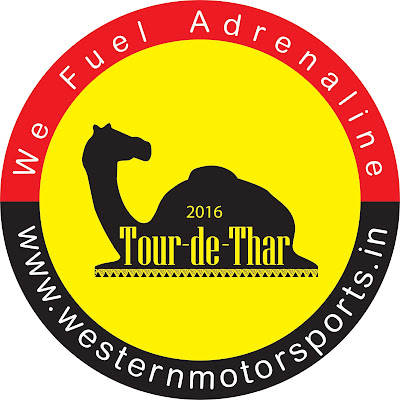 Tour-de-Thar Fifth Edition 2016 (TDT) is a WesternMotorsports initiated motor riding expedition  to showcase Rajasthan for adventure, heritage and cultural destination for travel. Tour-de-Thar unlike other travel expeditions held, goes to unusual places, which are not even talked about and could be rather called ‘raw’ in nature. We setup our tents by ourselves and sometimes even cook our own meals and enjoy the local food and culture of the destination we stop by. This year was the fifth edition of Tour-de-Thar held from 24th to 29th December.

Tour-de-Thar Fifth Edition 2016 participants who came from different walks of life and different towns, got together at Western Motorsports on 23rd December for a briefing about the flow of Tour-de-Thar’16 and collected their merchandise, first aid box, stickers and wireless radio communication systems which we fitted to their vehicles. We decided upon the meeting point as a tea stall on Ajmer Road at 0500 hrs.

As planned and scheduled everyone with their bags packed and everything else set right, met at the designated tea stall for a morning cup of tea and some light breakfast. We were a group of 5 SUVs, 5 bikes and 1 service vehicle carrying our camping equipment and kitchen set up. We started the most awaited Tour-de-Thar trip at 0600 hrs.’ on 24th December, 2016. Some of our friends came as well to send us off and wish us luck for Tour-de-Thar. They even rode with us for some distance on their bikes on a chilly winter morning.

The Tour-de-Thar convoy rolling smoothly reached the first toll plaza and encountered the demonetization affect, the highway toll booths facing scarcity of currency notes could not give us change but came out with a wonderful approach to the problem and provided us with toll coupons of instead of change which could be used at another toll plaza. Friends riding with us bid adieu at the second toll after riding nearly 100 Km.

The Tour-de-Thar routes and locations which are simply beautiful and scenic and rather a USP of Western Motorsports, we embarked on our journey of unusual paths. So, we left for our first destination Jawai, leaving the National Highway and taking the back roads, traversing through small Ghats and forests. We thank our strong reconnaissance team for finding us such wonderful routes on which we even encountered water crossings in Rajasthan. It left us amazed as long after monsoons are over, we still found such crossings in Rajasthan which is a dry and arid state.

The convoy left for Leopard Safari as soon as it reached Jawai, wherein the convoy sighted a Leopard. Second day of Tour-de-Thar, our stay at Jawai, we explored the Jawai Dam and rode across the virgin trails around it and enjoyed the splashing around the small rivulets. Once reaching back to the camp, the convoy celebrated Christmas with some bonfire, music and dance. We relished a special recipe of Jungli Maans (we often call it a Shikaar recipe as this was the staple food of Rajas and Maharajas on their hunting expeditions).

Day 3 of Tour-de-Thar, we started our explorations further into the Thar desert and rolled for Bhinmal with an enthralling journey of the backroads.  Bhinmal is a quaint town where we further witnessed how the famous Rajasthani Jooti is made and were left with an awe for how much effort the artisans put in to make this beautiful, colourful and comfortable footwear.

On the same day Tour-de-Thar convoy moved towards Kiradu temple, crossing the dry river bed of Luni. But as they say, no adventure comes without certain difficulties. The convoy experienced great difficulties while crossing the dry river bed of the Luni wherein two cars and a bike got stuck. But with great team effort, we could get them rolling to Kiradu temple, also known as the Khajuraho of Rajasthan.

With the start of Day 4 of Tour-de-Thar, the convoy headed for Munabao Station, where the train exchange with Pakistan takes place. It was a wonderful experience driving on the deserted desert roads, winding and climbing over the dunes. We winded up our day in a typical Rajasthani Style with Rajasthani folk music and dance.

On Day 5 of Tour-de-Thar, with the break of dawn, we headed out for the most awaited segment of the tour, Dune-Bashing and diving deep into the Thar desert. A long day of riding through the wild Thar desert led us to the town of Osian, where we enjoyed the evening with the local artists and bonfire.

All good things come to an end, so was with Tour-de-Thar’16, with our last ride and last exploration with taking the backroads from Osian to Jaipur.

People often travel for distraction, but we travel for fulfilment. After the enthralling journey of six days, Tour-de-Thar’16 convoy ended up at the Sambhar - The Salt Lake.

Life is an adventure which should be experienced to its fullest. Our way of experiencing it is through travelling, in real sense. We pack a small bag with our tents and ride into the wilderness of Rajasthan, for us, travelling is simply riding and exploring.

See you in 2017 wading through the sands of Thar Desert.
Posted by Western Motorsports