Ok so I went to The Monsoon Ride 2009 organised by the Western Motorsports headed by the experienced and I would say versatile Mr Anukraman Singh Rathore and ace biker Raj Singh Rathore,over the last few days. Attached are my thoughts on the experience.

First off, yes, we went on the swift diesel. Originally, I wasn’t planning on attending. As I thought I wont be able to spare 3 days, though the event was for 1 day only but going to Jaipur(500 kms away) to attend a one day event would cost me 3 days. But after getting a call from my friend Chidanand Murthy who happened to be my Navigator for the event I decided to finally go for it.


So we (me, my wife n my little daughter, shes the one who enjoyed the most) left Chandigarh at 6 in the morning. The 500km drive took almost 9 hrs with the never ending traffic jams in Delhi (should have taken the other route) a stopover of 1 hr at a friends place in Gurgaon to reach the Amer Road Jaipur. Called up Anirban, the official (nice guy and always supportive) on reaching the picturesque Amer fort, though wanted to stop at the Fort for photography (clicked some on the move) but wanted to get the documentation and the scrutiny done at the pink city restaurant first. With the efforts of the very professional Shalini Mam and Anirban it was a breeze It hardly took 1 hr for all the documents completion with stickering and all and the scrutiny thing. The venue was good but it could have been better had it been on the roadside or something so that its a bit easier for an outsider like us to reach. The rally had a number of enthusiastic bikers with some coming from as far as Bangalore 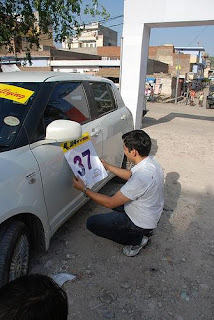 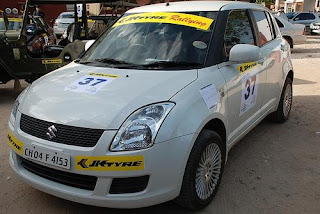 We were asked to reach the flag off site, next morning, which was opposite Jal Mahal at 5:00 am, beautiful site with Jal Mahal on one side and beautiful scenery on the other reached the venue bit early so had got some time to move around the place and click some pics. Were given the breakfast packets to be had on our way I think that is the reason the average speed was given 30kmph on a nice Highway so that the breakfast can be had on the move comfortably LOL ..... 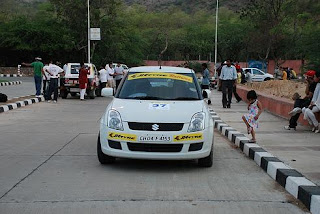 The first leg started had to maintain a speed of 30KMPH too low for a road like Delhi Highway but rules are rules and in a rally no rules are meant to be broken(if you wanna win) Taking a U turn on the highway entered a wildlife reserve kind of place which was all gravel It was fun but a bit disappointed for the low speed due to the free-roaming wild animals(for which we were warned in advance) in the reserve area. Lots of slowing down and breaking in every turn, it was somewhat disappointing but that is what is called a TSD rally.

So after arriving at the finish of the Leg 1 at Fort Bhangarh the so called haunted place we had enough time to have our lunch and to visit the fort, Excellent food, but would have been better if those were prepared and served on the venue itself with giving a little more comfort to the participants and not to forget the Water. Being a first of its kind event by a new Motor Sports Club the efforts were commendable. 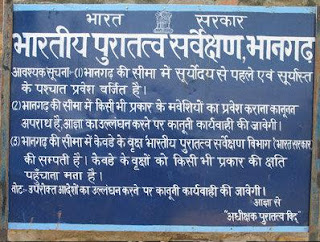 After finishing our Lunch we walked the path around the Fort, reading the information stands and taking pictures among the ruins of the fort. We saw a number of folks climbing the trees over the pond in the Shiv Temple situated within the fort and jumping into the pond, which we all thought was pretty nuts, but made for some neat photography. After the almost I hr walk around the base and lawns in the Fort, we reached to the top of the fort to find a big spectacular view of the Bhangarh village and the ruins of the fort. 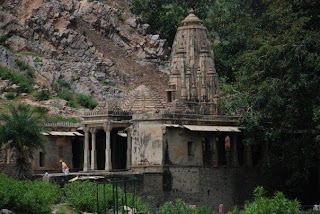 On the very beginning of the leg 2 we were stopped by a herd of Camels, We lost some precious minutes wading those off but had coverred up the time lost in next few kilometers. The leg 2 went through small villages it was a great road, lots of twisties. We had a few spots where we found a good rhythm but again the speeds were kept pretty low and there was a lot of braking through the turns as the ride wore on. Then came the perfect spot, the catch, very well planned Bhul-Bhulaiya, a loop, this is was the finest spot of the whole rally this was a turn where almost everybody including the Dhurandars of rallying got wrong But not Chidanand (he is perfect at reading the road book), may what comes stick to the roadbook this is what I have learnt from this). The ride back from the Bhangarh fort to Jaipur was awesome, with great views of the Marble Mines, Forts on top of the hills and small villages. 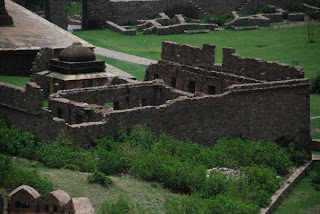 After a long wait, actually it was not a very long one but 2 hrs seemed to be very long one when you have nothing to do but wait. Finally the results for both the legs separately came out there was a little problem in the results but soon it was sorted out. And there came the moment of joy we had won the event.

Then there was a celebration, drinks, & party Got the winners trophy from the JK Tyre the main sponsor for the event. 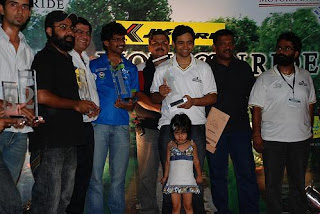 All told, a little more than 1000 kms of highway driving and 200kms of rallying. And a pretty fun time and well tasted the sweet win. Thanks for reading!