The Chalchitra Expedition’09 was organized by Bring Your Own Film Festival (BYOFF) in collaboration with The Tourism Welfare Society of Rajasthan (TWSR) and Western Motorsports (WM). BYOFF was conceived as an independent platform for film-makers five years ago and has been held on the beaches of Puri since then. This year, BYOFF had put together a last minute team of film-makers and film students for an expedition through Rajasthan, coupled with a workshop for the students on documentary film-making. The film-makers were to interact with the students, guiding and giving them the impetus to create films heralding their own unique styles and perspectives. The resultant documentaries are to be show-cased at the next edition of BYOFF.
TWSR and WM provided logistical support to the expedition tapping the expertise in their respective fields of concern. While WM promotes adventure tourism in Rajasthan by combining motorsports events with historical destinations, TWSR aims to redefine tourism in Rajasthan by opening up new destinations and incorporating global best practices in the Indian tourism industry.
Rediscover Rajasthan. As I read the byline of TWSR an involuntary smirk came on my face. Having travelled through Rajasthan on some occasions before, it seemed like another attempt to catch the unwitting traveler’s imagination. Certain images immediately came to mind: desolate highways leading from one tourist paradise to another, imposing forts and embellished havellis, decorated camels, women clad in colorful ethnic dresses; and all the tourist kitsch that has become typical of Rajasthan.
Yet, as an aspiring film-maker myself, the expedition sounded alluring with its promise of close interaction with former and current students of India’s oldest film institute FTII Pune along with a handful of other independent film-makers. The possibility of observing how the visually rich landscapes would be perceived by diverse sensibilities was always interesting to learn and hone one’s own skills.
The expedition kicked off on a sleepy early morning from Jal Mahal, Jaipur. A sense of over-riding enthusiasm lingered heavily in the air as all of the participants wanted to make the most of a land and culture new to them. Mapping the vibrant colors, music, dance and song, the living traditions of Rajasthan, was a challenge cinematically and aesthetically. 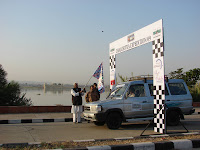 After the ceremonial photo-ops and fanfare at Jal Mahal the expedition proceeded to the quintessential Jaipur attractions: Amber Palace and Jantar Mantar. As the evening settled in, the motley crew hustled back to the Pink City Restaurant, a hotel run by TWSR. Rajasthani folk dancers performed later, culminating the first leg of the 10 day expedition.
Early next morning we left for Bikaner, home of the famous Junagadh Fort. Several pleasant surprises came our way during the day: indicators of how the expedition would shape up ahead. Instead of the long, lonesome, often cold and impersonal highways we took the bumpy, narrow but welcoming country roads that led through dusty, unwary and unsuspecting villages. The locals in Rajasthan are a friendly lot, and we fielded their curiosity readily. The highlight of the drive came around noon, when we crossed the 2nd highest peak of the Aravalis. The loops leading to it are a strange sight in this otherwise lucid landscape. The peak is also home to a 1000 year old temple known as Harshnath. A row of windmills scattered around the top perfect the setting and add to the prominence the hill rightly deserves. 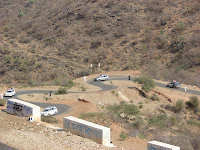 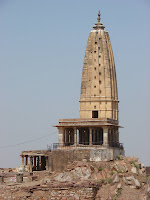 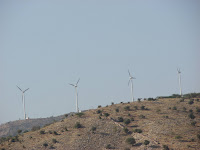 These intriguing roads have been unearthened by WM in their long grilling recces across Rajasthan for the motor rallies they organize. As a young energetic outfit, they are on a constant lookout for landscapes that captivate and yet are challenging for the participants. By the time we reached Shekawati, home to the famous painted havellis, the sun had cast its shadow on the land. Hurrying through a couple of havellis we saw glimpses of the painstaking details and designs that had made the embellishments famous worldwide. The darkness made filming/photographing rather cumbersome and unfruitful, and we decided to continue our journey to Bikaner. But we had seen enough to know that this district warrants for a timely and researched visit in the future.

The chill of the night at Bikaner caught some of us off guard, sending us scurrying for shawls and jackets. The next morning we headed for Junagadh fort, turning over another page in the annals of history. The fort and palace are set in huge grounds overlooking the administrative area of the city. The museum inside is very comprehensive in chronicling the history of the city and its fort, and is definitely worth a dekho. Our next stop was another out of the ordinary and interesting destination: a camel breeding farm and research centre, one of the biggest of its kind in India. There we had the rare privilege of watching the likes of Mr. Bikaner, Miss Jaisalmer et al, chewing cud peacefully, satisfaction brimming large on their faces. 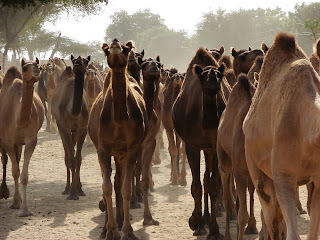 The following day’s drive to Jaisalmer was easily the most rewarding and riveting. Shortly after we left, we had brief photo-ops with scores of Rajasthani women clad in traditional colorful clothes putting in their hours of work for NAREGA.

Lunch time saw us arrive at Kolayat, a small bustling town in the middle of the desert. But what makes this otherwise ubiquitous town unique is a lake blooming with lotuses in the heart of the desert! One could take a shikara ride or share the religious fervor of the numerous babas/sadhus lingering around the edges of the lake. The small eatery which housed our hungry lot also surprised us with its well managed response to our unannounced visit, without compromising on the quality or the taste of its offerings. The small town of Kolayat gave us several deep and fond impressions. 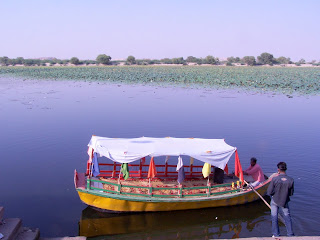 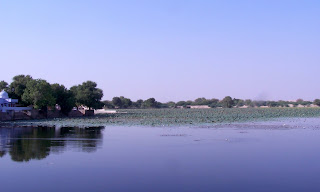 The journey ahead got more interesting as we raced, albeit in futility, to meet the sunset at a huge permanent dune. What had set our pulses racing were the sights on both sides of the road: a lush green landscape fuelled by the Indira Gandhi Canal on one and huge sand dunes on the other. Perched on a suitable summit, the views are nothing short of striking; both for the stark contrast they offer and the sheer volume of landscape they engulf in their reach. Being in the constant company of Dr. Mahaveer Singh Nathawat (President of TWSR) and Mr. Anukraman Singh Rathore (President of WM) , illumined me in no ends on the travails and tribulations of Rajasthan. Seemingly trivial to a casual tourist, the incisive information they share fills the nooks with sympathetic details and make travelling a much more inclusive and immersive experience. Women shoveling sand in a daunting landscape, a surreal boat ride and the visually dramatic drive; the day seemed to hold too much at times and we carried on, our spirits rising to a higher crescendo with each experience. 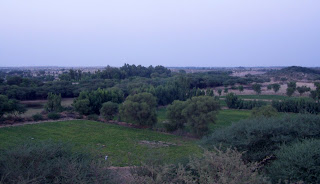 The next couple of days were spent in Jaisalmer, the city which for me perhaps epitomizes Rajasthan the most. The Jaisalmer fort is one of the few living forts still and is also known rightly as Sonar Qilla or The Golden Fortress. It houses a couple of museums, ancient Jain Temples, havellis and entrepreneurial city people. The narrow winding cobbled streets from the erstwhile ruler’s era seem to be burdened with an enormous sense of history and the friendly tourist shops dotting them make walks immensely rewarding. We also did the customary visits to the larger and more famous havellis inside the Jaisalmer city and the camel walk in the dunes of Sam. 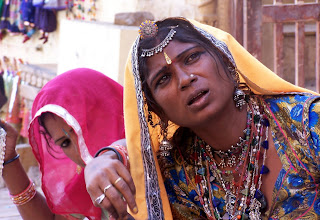 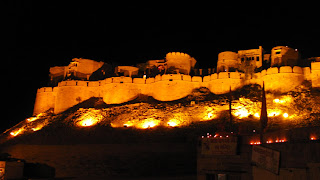 Outside the city limits lies a village in ruins, the ghost town of Khaba. According to legend, it was abandoned in one night, as thousand fled to escape the wrath of the ‘evil’ Pradhanmantri of Jaisalmer Saalam Singh Oswal. The ruins run for a mile or two and the numerous windmills strewn in the backdrop add to the eeriness and give weight to the numerous creepy stories floating around. 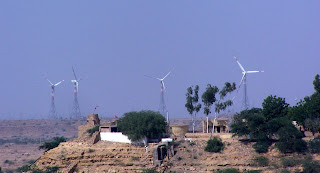 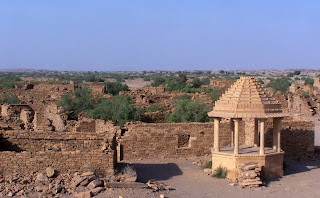 The last leg of the expedition saw us making our longest single day haul yet, pushing from Jaisalmer to Pushkar. Enroute we stopped at the village of Khichan, which has been in the news of late for being the favored place of resting and feeding of the migratory Demoiselle Cranes. The breeding grounds of these birds are the plains and steppes of Eurasia and Mongolia, and many perish on the long arduous haul due to fatigue, hunger and attacks by predators. Here they are revered by the villagers for their vegetarian eating habits and for the practice of monogamy. Conversations with the local inhabitants gave us interesting clues about the recent migratory trends. From a handful of birds visiting the village some years back, it has now become a full blown migration with close to 10,000 birds resting in winters. The efforts of the villagers have not been in vain and now the Government of Rajasthan has taken note in view of the international fame the village has attained of late.

Racing ahead, we caught the world famous Pushkar Camel Fair a couple of days before its culmination. The low attendance of the cattle this year caught me with surprise and disappointment. The primary reasons attributed to it were our late timing (the best cattle gets traded in the initial days) and if you would believe it, recession! The villagers complained of the low prices most of them had been offered this year being hardly enough to cover their costs of travelling back home. There was much hum-ho at the festival with many cultural, religious and tourist activities being staged at different parts of the site.
The day the group split for their respective destinations we had an informal discussion wherein all the members shared what the expedition had entailed for them. The frequent sessions of interaction as planned earlier could not happen due to paucity of time mostly. This sole session did come too late but was not too little for sure. Numbers and pleasantries were exchanged thereafter.
Proceeding back to Jaipur as the expedition drew to a close, my face was split open in a wide unabashed grin. How the cynical smirk at the start, slowly transformed itself into an easy recognition of the richness of the vivid landscape eluded me myself.
Atharva Gupta
Posted by Western Motorsports