J.K.Tyres The Monsoon Ride Kicks off!! 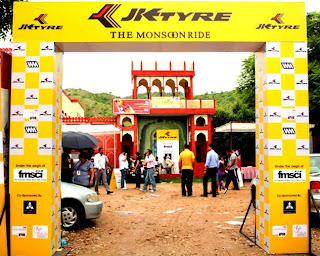 Oh what a day it was!!!
It rained cats and dogs..
It rained participants..
I swear..Every official is dead(not literally)
Ceremonial flag off is day which is considered to be the most hectic day of a rally. It is the culmination day for all kind of scrutinies. Rush and Movement was felt at each and every counter.
Gods of Rains blessed the event,by cooling of boisterous Sun and sending cool breeze around.
Passion and passion...that was the only thing that could be seen oozing out. Heated discussions, clandestine planning was going on around.
Some participants were in group of two and some were with their team. People were getting nostalgic and talking about the old rallies where they had met earlier.
Motorsports events creates bonds.............Bonds that die hard. People meet, they become partner for events and they become friends for lifetime.
J.K TYRES THE MONSOON RIDE hopes to be one such event. We want to nurture so many things apart MOTORSPORT.
His higness Brig. Bhawani Singh Ji of Jaipur did the ceremonial flag off of the event. All the entries are done and event is ready to be kicked off tomorrow.
Parc Ferme starts at 3 oo Am tomorrow. And rally starts at 5 00 in the morning..
So the monsoon ride begins tomorrow.......................
COME WITH US.. BE PART OF A SAGA IN MAKING..
B
Posted by Western Motorsports