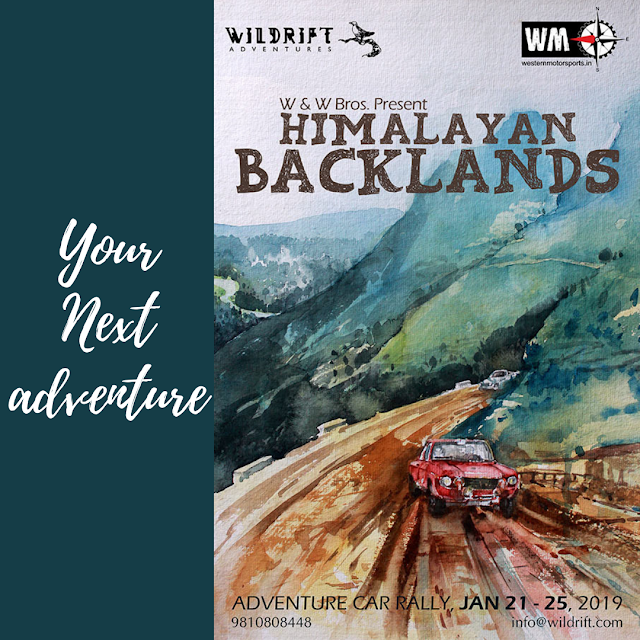 W & W bros have brewed your next adventure in the Himalayas.

January 21-25, 2019, mark your calendar and gear up for Himalayan Backlands Rally. (HBR).
HBR is based on TSD format. It is a rally, no special modifications needed, it is run on public roads within legal speed limit, route is a surprise, car with least penalties over a distnce wins, and you need a navigator with a calculator.

What is TSD car rally?

For those not initiated into motorsports, the word 'car rally' means expensive modifications, racing at high speeds and spectacular overtaking eventuating into a win.

TSD car rally however does not depend on the capabilities of driver at high speed, nor does it depend on how fast your car can go. Ordinary street legal  car can be used in TSD rally. Also for this reason this format of rally is far less expensive and one that can be enjoyed by majority of people. TSD car rally focuses on maintenance of precise average speed and time. Your co-driver i.e. navigator place the vital role in navigating and calculating the precise time as much as it is important for you to know driving a car.

TSD is known as time-speed-distance rally. The objective of this motorsport rally is driving each segment within a specific time and average speed.

Where will Himalayan Backlands Rally (HBR) be conducted?

HBR will be conducted in Kumaon region of Uttarakhand between 21-25th January 2019. HBR is a multi-day TSD format rally. It will be conducted on hilly region - public roads with bits of off-road track sections. All speed limits will be within the limits prescribed in this region.

Individual or team for HBR?

TSD rally requires a driver & co-driver i.e. navigator. This pair forms a team. It is suggested that both members of team know to drive, though it is not essential. It is expected that your navigator is good at calculations and directions.

On each day of the event teams will be briefed and will be given a route schedule. This will contain information useful for navigator - such as route, distance etc.

Prizes will be given for the winning team based on the points acquired.

Watch this space for more information regarding registration dates and regulations.

Himalayan Backlands Rally is brought to you by Wildrift Adventures & Western Motorsports.