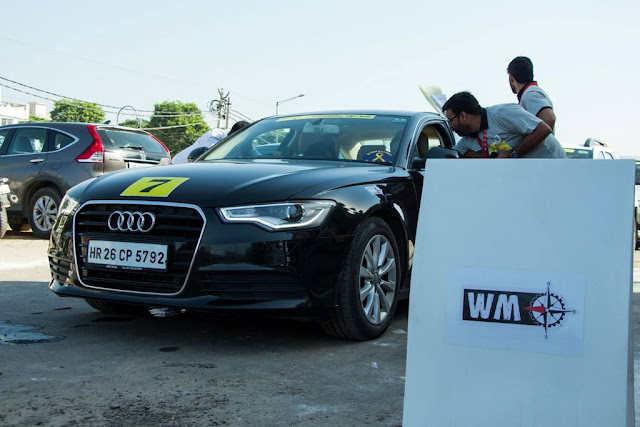 On day one 4th CanKids rally participants were raring to go, after the previous day’s ceremonial flag off. The participants gunned their vehicles for the day’s destination—Mayo College Girls School, Ajmer. Along the way, they were challenged by the clues to the day’s event—The Treasure Hunt. Looking for clues and navigating through the Road Book. The treasure was to finish in a stipulated time. Surprisingly, the Treasure Hunt was one of the high points of the rally. The participants enjoyed thoroughly as they really had to wrack their brains to solve the clues. The Treasure Hunt organised by Western Motorsports got rave reviews as many commented that it was different than what they were normally used to.
A splendid traditional Rajasthani luncheon welcomed them at Kanchan Kesri on NH 8 where the Chief Scrutineer, Capt Amarjeet Sangwan from FMSCI, inspected the vehicles and gave his go-ahead to the proceedings of the rally. Following the Scrutiny, the participants sped to the venue for that day’s awareness event. Mayo College Girls School extended a hearty welcome to the rally participants.
The welcome ceremony and a presentation in the auditorium was followed by a high tea.
To a packed auditorium, a brief idea of what CanKids aims to achieve was given. Some of the Cancer survivors related their personal battles and many in the assembled audience fought back tears. It was a heart-warming narrative of the trials and tribulations of fighting cancer.
An appeal to everyone present was made to contribute to the cause in whatever capacity possible. A round of felicitations by CanKids, and some sloganeering, concluded the event at Mayo College Girls School.
The strain of a long drive had not dampened the high spirit of an adrenaline-fuelled rally experience. Day 1 concluded with a scrumptious dinner at Country Inn & Suites, outside Ajmer, and the announcement of the winners of the Treasure Hunt. In brief, once again, a revision of the concept and rules and regulations of Day 2’s TSD were explained to the participants.
Posted by Western Motorsports