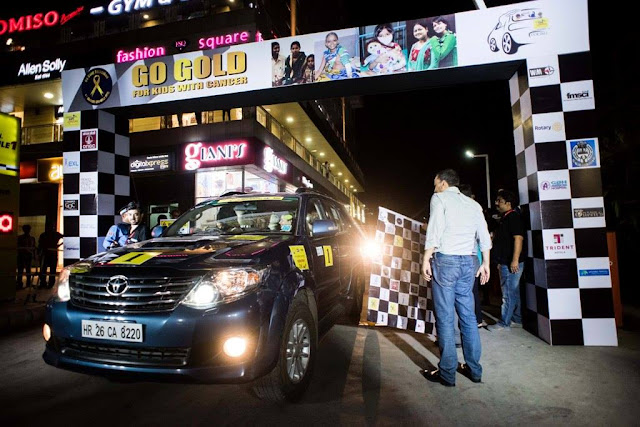 4th CanKids rally day zero preparation started today. Accompanied by some light-hearted banter, in a superb setting of Queen’s Bar & Lounge, GECC Mall at Sohna Road, Gurgaon. The Participants for CanKids 4th car rally were introduced for the first time to the concept of Time, Speed, Distance (TSD) rally by Team Western Motorsports. The participants were briefed on all the aspects of the rally specially the TSD rally. Rally participants were explained the basics, the rules & regulations, safety and the general working of a well organised professional rally.
The  rally participants then proceeded for scrutiny Zone. Documents were checked and kits were distributed. Competitors prepared their vehicles for vehicle scrutiny with compulsory stickers. The vehicles were checked for basic safety and scrutiny norms set up by the FMSCI (Federation of Motor Sport Clubs of India). CanKids organised a super show for all the competitors and to all mall visitors.
Everyone was enthralled by the performances and the young cancer survivors put a splendid song and dance routine. It was truly a celebration of victory over most impossible odds.
Post some very insightful speeches, it was time for group photographs and everyone jumped to the opportunity to get themselves captured by the shutterbugs. In a ceremonial gesture, balloons with prayers written on them were released in the sky so as to send a message to God.
All this merriment was followed by High Tea after which the cermonial flag off for the rally took place. The participants zoomed off one by one as the chief guests, Dr. Blossom Kochhar, Race driver Garima Avtaar and the  Joint Commissioner of Police, Gurgaon Mr. Saurabh Singh flagged them off.
Posted by Western Motorsports