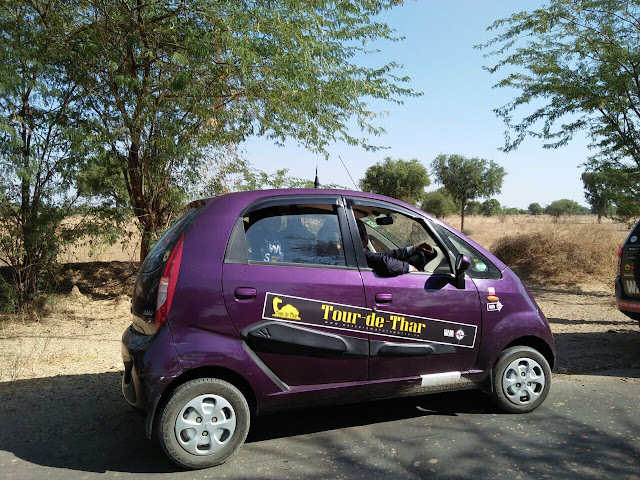 Fun For Both Driving Enthusiasts And Lay Tourists

We first heard of Tour de Thar (TDT) some years ago from our friend, Shalini. She had loads of exciting stories to share about how much fun it was. But it sounded like one of those typical motor sports events that was meant for hardcore motor enthusiasts who were passionate about their vehicles and driving. It didn’t sound like an event meant for the usual tourist kinds like us. And certainly, our Nano didn’t seem to fit the bill in my mind.

Eventually, I succumbed to the TDT stories from Shalini, Sagar bhaiya and decided to join TDT December 2017 with family: my wife Anupama, brother-in-law Siddharth, and our 5-year-old daughter, Kanika. My initial apprehensions seemed completely unfounded.

True, most other vehicles were large SUVs, 4-wheel drive vehicles. But our Nano managed to hold its own with some help from the team on sandy stretches and the fact that we probably slowed the convoy a bit (owing to my driving abilities, not Nano’s capabilities).

TDT has much to offer both for the driving enthusiast and the lay tourist: back roads of Rajasthan besides the beautifully laid out highways, some bits of off-roading: sandy stretches, dunes, dry lake beds (tricky because you might encounter slightly wet patches that are not easily identifiable), beautiful night-camp locations, local cuisine, and some undiscovered forts, abandoned villages (historical), the bullet baba temple (it happens only in India) in Jaisalmer, water bodies with migratory birds in the middle of the desert, a Bhopa-bhopi performance on a cold winter evening; and a full-fledged Langa team performing on another evening.

My most abiding memory of the trip was the Langas performing at sunrise on the sand dunes with Anukraman ji requesting for traditional numbers that they would usually avoid performing for groups of tourists from outside Rajasthan: at the most, you could get a ‘Kesariya Balam’ out of them. Otherwise, it would be a medley of some traditional numbers followed by a few Sufi numbers and maybe a traditional song or two popularised by Bollywood. The sunrise performance ended with a soulful bhajan. Can’t ask for more, thank you, Anukraman ji.

Our little one, Kanika, enjoyed the entire journey to the hilt. Definitely the fittest member in our family, she wasn’t tired after a day of driving and fully charged up for the evening fun. She explored the dry lakebed at WM Sar (named by Digvijay 'Deejay' Singh and Anukraman ji of Western Motorsports since it didn’t seem to have a name) and was thrilled to see our Nano stuck in the mud. She closely watched the efforts to extricate the Nano and even offered help to dig out the mud around the tyres. She was excited about the possibility of the Nano being towed by the powerful Toyota Fortuner (no such luck though, I missed adding the tow-hook to Nano before the trip). The team helped with manually pushing, lifting the Nano out of the mud-trap. We reached the camp without further incident. Kanika loved the sand dunes at the next camp in Jaisalmer, rolled over to her heart’s content and scaled the dunes several times.

Kanika is now following up with us: ‘hum wapas TDT kab jayenge?’ We look forward to being a part of TDT December 2018. 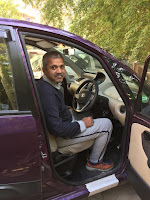 Rahul Rajagopalan is a well read person. His genre in reading is mostly related to literature, historic importance, historic period, art and music.

He currently works with a leading publishing house at Delhi, India.